Notes from the Field: Breastfeeding in Timor-Leste

JK: Is it common to see women breastfeeding in public spaces in Timor-Leste? Because here in the US, women are covering up or often use the bathroom to breastfeed.

MAM: Breastfeeding is a well-accepted practice in Timor-Leste as in most non-industrialized countries.  Yes, you see women breastfeeding in public spaces.

JK: You have been working in Timor-Leste since 1999. Have you observed changes in breastfeeding or attitudes toward breastfeeding?

MAM:  Alola Foundation, founded in 2001 by Timor-Leste’s first First Lady, Kirsty Sword Gusmao, promotes breastfeeding as one of its major focus areas. They are an enlightened group and they’re very dedicated to delivering the message of giving breast milk exclusively to newborns for 6 months minimum.  I think that has ultimately borne some fruit.  For example, two national Demographic Health Surveys show that in 2004 47% of women breastfed within 1 hour of birth and 5 years later in 2009, it was 82% of women. 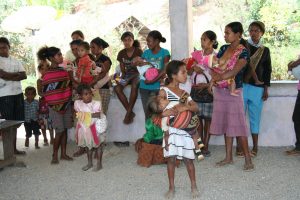 JK. Why was breastfeeding set as a national priority in Timor-Leste?

MAM: It’s understood that in the local culture, pretty everybody breastfeeds at very high rates. However, there are two problems associated with it and those problems can have a big effect on the benefits of breastfeeding. One problem is that mothers don’t breastfeed right away, so colostrum (breast milk that comes out in first 2-3 days) is not delivered to infants right away. This is true in many cultures.  Colostrum is kind of yellow colored so it doesn’t look like milk—for a long time in many parts of the country, the practice has been to discard the colostrum. Mothers either give sugar water with the bottle or maybe they give the baby to another breastfeeding woman for the first 3 days or something. They don’t like the colostrum. The Alola group stresses the importance of immediate breastfeeding (putting the baby to breast right away after delivery). The other problem is exclusive breastfeeding: the global recommendation is nothing but breast milk for the first 6 months of baby’s life. But there’s the local practice of supplementing with tea or water very early.  It’s hot in Timor-Leste and people assume that babies aren’t getting enough liquid so they inappropriately supplement breastfeeding with other liquids [that can be unnecessary and harmful].

JK. So what are some predominant cultural beliefs and practices that get in the way of promoting continuous breastfeeding for 6 months including the colostrum?

MAM: It’s very hard to say where the beliefs came from but there is belief that colostrum is dirty and that it’s bad for the baby and that it causes diarrhea. And the other thing is — and we have seen this in several areas — they give a tea to the baby because they think the whole intestinal tract needs to be cleaned out.  They give them a tea because the newborn’s first stool is blackish stuff and they want to get rid of that. Newborn diarrhea is not an uncommon thing so to cause it by giving babies tea is dangerous in part because of contaminated water and absence of sterile bottles. We don’t understand the cultural bases but it’s certainly been a practice over time. Early on, we had some qualitative work when we started our maternal health program, women would say that the nurse told them not to give babies colostrum! It’s true in so many countries, cultural beliefs and practices can contradict [scientific data] and we don’t really understand why.

The health message is very clear: exclusive and immediate breastfeeding to ensure healthy babies and mothers.  Health Alliance International in Timor-Leste is committed to working with the Ministry of Health to strengthen the health system with a focus on maternal and child health.

Tomorrow’s post will cover HIV and breastfeeding — what are some challenges and what are the recommendations?