Breastfeeding 101: What is the big deal about breast milk?

By: Julia Robinson and Amanda Young

This week Health Alliance International (HAI) is celebrating World Breastfeeding Week! This annual event brings together leaders in global public health to underline education and the importance of breastfeeding and all the health benefits it can bring for mothers and their babies.

Today we’ll kick things off by asking: So just what is the big deal about breastfeeding?  And why does the World Health Organization recommend that moms breastfeed exclusively for six months?  As we’ll see, there are lots of benefits for both the mother and the baby.

How breast milk benefits the baby: How breastfeeding benefits the mother:

Despite the undeniable benefits to both mothers and infants, why do less than 40% of mothers breastfeed exclusively throughout the world? Rates are improving year by year but a lot of children are still not being breastfed and this is not unique to developing countries. Consider the following:

Why should women exclusively breast feed? In addition to all the health benefits listed above, there are a number of risks associated with bottle-feeding and when solid food is introduced too early in life, there is an increased chance for a food allergy. Lower-income countries – such as those where HAI works –  have an increased chance of encountering these risks, such as the potential for contaminated water used in mixing up formula. 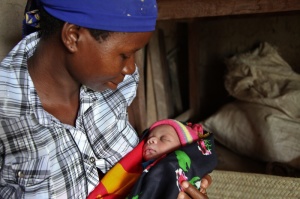 Although breastfeeding is extremely beneficial for both the mom and baby, there are number of barriers that can prevent women from breastfeeding their children. Breastfeeding is not necessarily easy or intuitive, and many women experience nipple pain, fear of not enough milk to sustain baby, and frustration with unsuccessful breastfeeding attempts. In the United States there is low social support for breastfeeding mothers and many times shaming of women who breastfeed in public.  In other countries, social and cultural practices sometimes encourage new mothers to introduce water, tea, or porridge into an infant’s diet earlier than is recommended for the health of a newborn.   Communities, health professionals, and families can all act to help support women’s decisions to breastfeed, and there are many social program that advocate creating a more supportive environment for women.

What’s next in our blog series…

Tomorrow, we will hear from Mary Anne Mercer, HAI’s Senior Maternal/Child Health Advisor in Timor-Leste.  How does Timor-Leste’s breastfeeding rate compare to the U.S.? Stay tuned!

Later in the week, we will address HIV and breastfeeding, why more women don’t breastfeed, and women and the workforce.