Get ready for your close up: HAI’s IDEAs project on film

In March 2018, the Doris Duke Charitable Foundation (DDCF) and FORWARD STORYSTUDIO, a production company based in San Francisco, visited Sofala Province, Mozambique, to film HAI’s Integrated District Evidence to Action (IDEAs) program. IDEAs aims to use evidence-based approaches to reduce infant mortality in Mozambique.  Footage will serve as promotional material for the DDCF African Health Initiative (AHI), a multi-country consortium that seeks to catalyze significant advances in strengthening health systems by supporting partnerships that will design, implement, and evaluate large-scale models of care that link implementation research and workforce training directly to the delivery of integrated primary healthcare in sub-Saharan Africa. 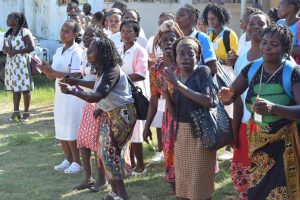 HAI and DDCF visiting a rural site in Buzi District Mozambique. The team was greeted with a song and a warm welcome.

The final cut will be a total of 3-5 minutes long and will place emphasis on the way in which health systems strengthening efforts in Mozambique have positively impacted maternal and health care delivery in central Mozambique. Representatives from HAI, the Center for Operations Research Beira (CIOB), the Provincial Directorate of Health (DPS), and the District Directorate of Health (DDS) were interviewed to capture the project’s novel systems strengthening approach and highlight core benefits and successes of the project. Arial and exterior shots of urban and rural health facilities in Sofala province were also captured for the film. 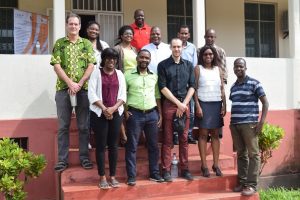 Group picture with the DDCF, CIOB, and HAI staff in front of CIOB after shooting exterior visuals of the facility.