How do we measure the effects of war?

The question sounds simple, but becomes complex quite quickly: how do you measure the effects of war?  In particular, how do you know how many people died as a result of combat?

In a new article published on PLoS One, HAI’s Amy Hagopian and her team of researchers investigated precisely that question.  They were interested in knowing what the effects of conflicts in Iraq – including the Iran-Iraq war (1980-88), the First Gulf War (1990) and the US-led “Operation Desert Storm” (1991) – had on the population. “Usually deaths are recorded in civil registration systems,” Dr. Hagopian says.  “But in times of war, life becomes chaotic, and in these situations many governmental institutions shut down.”

Using data from a population survey, the study focused on sibling-reported deaths; that is, a during a door-to-door survey in Iraq, data collectors asked 4,287 respondents to recall if their siblings had died between 1980-1993, when, and what the cause was. Using these responses, and extrapolating to the larger population, they found that the Iran-Iraq war led to about 200,000 deaths, while the First Gulf War led to about 40,000 – and that reported deaths during peace times before and after the wars were significantly lower. During wartime, 60% of sibling-reported deaths were attributed to war-related causes (gunshots or airstrikes).  While these findings make logical sense – that during times of war, more people die – this is the first time that a population survey has been used to calculate a more precise estimate of the toll of war. 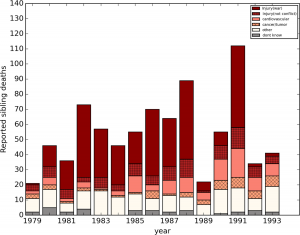 One of HAI’s Advocacy Program’s areas of focus is using public health solutions to end war.  You can find out more about our Advocacy Program here and you can support HAI to help us continue this critical work.