HAI staff in Timor-Leste just completed training for midwives in the mHealth program, Mobile Moms, in Ermera district on February 18, 2016. Ermera is the most populous district after the capital district of Dili with a population of 124, 687. It is one of the most in need with a high population and with one of the lowest rates of births with a skilled birth attendant in the country.

Government midwives and select doctors from 31 health facilities were trained on Mobile Moms (Liga Inan in the local language), a mHealth program that uses mobile phones as a means of strengthening communication between pregnant women and their midwives. Participants learned how enroll pregnant women into the Liga Inan service developed by Catalpa International, during their first antenatal care visit, after which automated maternal health promotion messages are sent twice weekly.

HAI facilitators used variety of methods during the 3 day training, which included: presentation, film, role-plays, and lots and lots of practice! Participants familiarized themselves with the smart phones used to implement the program and took turns being ‘pregnant women’ and enrolling them.

Through the use of role-plays, participants practiced carrying out phone consultations with pregnant women and assessing whether they needed to come to the facility for urgent care. Midwives also refreshed their existing skills around various methods that can be used estimate a woman’s due date and later practiced at a nearby clinic. It is essential that a woman’s estimated due date is correct as the service alerts midwives to follow-up with women 3 weeks prior to their estimated due date and talk to them about their birth plan.

Familiarizing themselves with the Liga Inan phones.

Though the program smartphones are provided to all health facilities, where the midwife on duty is responsible for the phone and for responding to requests from mothers.

Participants sent each other fake messages about health related community events and clinic hours to practice using another function of the program that lets midwives send bulk text messages to all the women in their catchment area. ‘I liked learning how to use the program on the phone. The explanations were clear and easy to understand. As a midwife, this new program will really help me in my work’, said Casilda Fernandes, Midwife.

Ruben Estevao Lopes, HAI mHealth officer and lead facilitator during the training, said ‘I enjoy sharing my IT technical knowledge health staff and it’s exciting to observe the moment when older, more senior midwives ‘get’ the technology.

Their faces light up.  And rarely does an IT guy get to work on a program like this that has direct contact with health staff and community members.’ Ruben and other HAI colleagues will continue support midwives through follow-up visits and by manning a hotline that health staff can call to resolve technical issues that may arise. 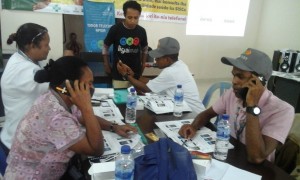 Health staff practice calling each other with the Liga Inan phones

Martinho Soares, a doctor in Ermera municipality, noted, ‘This program will make it much easier for mothers to contact health professionals. We will be able to keep an eye on them much easier than before. I especially like that Liga Inan will facilitate is to follow-up with mothers’ when their estimated due date is near.’

Ermera is the fourth district to implement Mobile Moms. The HAI and Catalpa team hope to see similar gains in increases in numbers of women accessing antenatal care and electing to give birth in a health facility.