On Thursday 28 June, Lautem Municipality became the eleventh municipality in Timor-Leste to launch the “Liga Inan” or “Connecting Mothers” mobile health program. Pregnant women in Lautem can now join the 33,000 other women in Timor-Leste who have participated in this program nationwide by registering with their local health providers during antenatal care visits. Women who participate receive messages to their mobile phones about their health and the health of their babies during pregnancy and for six months after delivery.

The Liga Inan program has been adopted by the Ministry of Health to help improve the linkages between pregnant women and the national health system, after a 2015 evaluation of the program showing that women participating in Liga Inan are twice as likely to give birth in a health facility and seven times more likely to receive postpartum care than women who do not participate in the program.

At the launch in Lautem, the National Director for Policy and Cooperation, Mr. Narcisio Fernandes, attending on behalf of the Director General for Health Services Ms. Odete Viegas, cited the unacceptably high maternal mortality rate in the country and emphasized that giving birth in a health facility with a skilled health provider is a key means of addressing maternal mortality. Mr. Fernandes praised the messages that are sent out to mothers as also being relevant to men and other family members such as mothers in law, and a key means of involving these family members in safe birth planning and mother and baby nutrition.

Mr. Fernandes appealed to municipal health providers and local leaders, such as the Lautem municipal administrators, police, and church representatives in attendance, to work towards making the program a success in Lautem municipality by providing their full support. He thanked the Australian Government for their commitment to supporting the Liga Inan program and implementing partners Health Alliance International (HAI) and Catalpa International for their work to steer and support the program in eleven municipalities in Timor-Leste.

Health providers have already registered more than 300 women in Lautem to the Liga Inan program in the first month between May and June 2018.

The program will be launched in the Oecussi-Ambeno Special Administrative Region later in 2018. Six municipalities have been handed over to Ministry of Health management including Manufahi, Liquica, Aileu, Ermera, Manatuto and Ainaro municipalities.

For further information about the Liga Inan program, check out our our Liga Inan homepage or visit www.ligainan.org 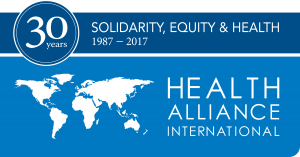