“Three years into Civil War: How are Syrian refugees doing?”

Earlier this week, I had the great pleasure to attend a talk given by Dr. Richard Garfield, who works at the World Health Organization as the Director of the International Office for assessing and responding to humanitarian needs in crisis countries.  He is also Emeritus faculty at both Columbia and Emory Universities.

He was in Seattle to give an update on just what the situation is like on the ground in terms of Syrian displaced and refugee populations.  He gave a review of what is known and what is being done in the 6 countries where Syrian refugees are, including cross border operations to provide health services in no man’s lands, the use of services among refugees, and evolving disease profiles in this largely urbanized, non-communicable disease dominant population.

In short, the answer to the question he posed in the title of the talk: “Three Years into Civil War: How are the Syrian Refugees Doing?” is simple and heartbreaking: Not so good.  Presenting a series of data from a new UNHCR report, Dr. Garfield explained that over the past few years, the number of displaced people has gone up and the number of refugees has gone down – but that is because surrounding countries are more reluctant to let refugees cross the border. 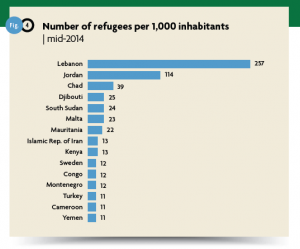 Accessing health services for those affected by the crisis in Syria is not easy.  Health services within Syria have declined dramatically amidst the violence, with fewer than half of health facilities and hospitals fully operational.  For refugees seeking services in neighboring countries, they are increasingly turned away, asked to pay for health care, or made to show a passport before being granted care – the last being particularly difficult for people who are far away from home.

Worryingly, cases of preventable diseases and deaths or disabilities from injury are on the rise.  “When polio emerges in a country that hasn’t had polio in the last 20 years,” Dr. Garfield said, “you know things are not so good.”

As long as the violence in Syria continues, he concluded, things are not likely to get better anytime soon.  The only solution to restoring health services – which were formerly quite stable and good – in a country that is worn out from years of civil war is a return to peace.

HAI has transitioned our global operations and active programs to the local NGOs CSM (Mozambique) and HAMNASA (Timor-Leste). Learn more using the buttons below